Where are we at church? Where are we at? We should be sitting in the throne room leaning on the Father’s breast getting our daily instructions from the Father – but where are we truly at? I am coming after a bride without spot or wrinkle.

Yes, darkness has begun to cover this earth, but it does not have to cover you. You are mighty weapons that I have been fine tuning for such a time as this. You are weapons that I can us in this battle for the souls that are in such turmoil and do not understand the things of the Heavenly Realm.

You are the ones that I so desire to use, for you have been through the furnace of affliction and you have been refined by the fuller’s soap and you know what it is to fight the enemy and overcome.

There is no grey area. I pulled you out of the miry clay and I taught you of Heavenly Warfare and I taught you how to fight the good fight of faith and win in every battle. Did you come out without any scars – {NO}? But those scars are the proof that you serve a Father that cares and a Father that loves His own and will fight for them on all fronts.

You are true vessels of honor that I so desire to work through little ones. You are the overcoming ones that have passed the tests of time and came out rejoicing and shouting the praises of the Father to all who had ears to hear.

Malachi 3:2-3 (ESV)
2 But who can endure the day of his coming, and who can stand when he appears? For he is like a refiner’s fire and like fullers’ soap.
3 He will sit as a refiner and purifier of silver, and he will purify the sons of Levi and refine them like gold and silver, and they will bring offerings in righteousness to the LORD. 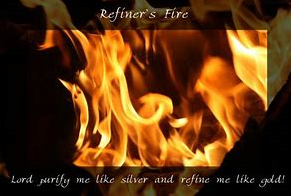